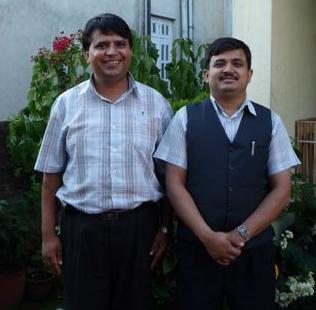 Carolyn first went to Nepal in 1998 as part of the Soapbox Expeditions' first team to Kathmandu, expecting this to be a once in a lifetime trip. However, that initial 2 weeks has developed into a life long commitment and love for this beautiful country and its beautiful people.

Pastor Min Raj Dulal works amongst some of the poorest people in Nepal. He and his family were actively engaged in evangelism and church planting across Nepal and during that visit Min Raj, pictured here on the left with his brother Dipak, showed us some of what he was doing and his vision for the country.

Since that time Carolyn has returned many times, sometimes with Soapbox and more recently independently, helping practically with building, painting and installing water supplies in Himalayan mountain villages. She has seen a nation change from being the only Hindu Kingdom in the world to becoming a secular nation and pursuing a rather rocky road towards democracy.

It has been an amazing privilege and experience to be part of this transitional period of the country's history and to work alongside some of the key leaders of what God is doing in this Himalayan Mountain Kingdom.

Min Raj became a believer when he was 19 years old. Brought up a Brahmin he met a young Swedish missionary working in his village with Interserve. He was in Nepal teaching English. Due to the very oppressive and autocratic monarchy at that time other forms of political ideology were gaining popularity and strength. Min Raj asked if he had any books about communism and in response he was given a book that "had all the best bits about communism in it". It was a Bible.

Having read it cover to cover several times, and asking many questions, Min Raj met and gave his life to Jesus. He has not looked back. Soon after he led the rest of his family and Sunita, who was to become his wife to the Lord.

As there was no church in their village, they started one. The first of many.

In 1996 he came to the UK to study for a year at Kingdom Faith ministries and during that time the Lord gave him a powerful vision to evangelise his country.

Min Raj's mother had died when he was just twelve years old soon after giving birth to his baby sister. This gave him a heart for orphaned children. After moving to Kathmandu and leaving his career in teaching for church planting and pastoring, Min Raj started taking children into their home.

Then he and his brother Dipak, started a school to provide them with an education.

Today 60 children live in two lovely family style children's homes overseen by Sunita and the school has grown to 500, with a waiting list.

The small church that he started in a rented room is now housed in the purpose built Kathmandu Christian Centre which is also home to the bible college and a support base for many Christian ministries in Nepal.

He has helped plant over 250 churches and together with his network of Christian leaders support church leaders across the country with encouragement, prayer and teaching. 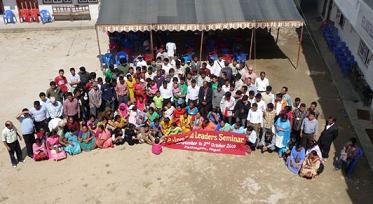 In September 2008 there was another first. 350 church leaders, pastors and evangelists from across Nepal gathered for a 4 day conference of teaching, prayer and worship at Kathmandu Christian Centre. Over 4 days Carolyn spoke about God's ongoing dream, vision and mission for Nepal, a nation at the cross roads.

She was joined by Sam Williamson who unexpectedly found himself leading four sessions on personal spirituality and holiness. This was Sam's first trip to Nepal and he has definitely been smitten by the Nepali bug and hopes to return soon.

The conference was an amazing opportunity to share with these leaders who in so many ways are pioneers of the gospel in Nepal. Some delegates had travelled 1200km to be there. The feedback was overwhelming and humbling. So many said they were encouraged and inspired to go back to their churches with renewed vision and passion and belief that they could indeed evangelise their nation.

In 2009 Carolyn returned for another trip and this time went on tour with Pastors Min Raj, Raju and Nawaraj down south to Chitwan. We visited several churches and led a conference near Buthal allowing local leaders who could not travel to Kathmandu to attend. It was another inspiring occasion with much singing and dancing and impassioned prayer crying out to God for the nation.

Another first was to speak at an open air Christmas Service under the blazing sun. Definitely not the UK which was gripped in blizzard conditions, but in the courtyard at KCC. Followed by a traditional Nepali Christmas meal - chicken curry. 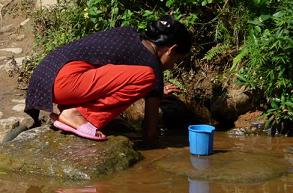 On three occasions now we have been able to install new water supplies in mountain villages around the Kathmandu Valley. Twice with Soapbox and more recently in partnership with Rotary Clubs in UK and Kathmandu. Whilst we have worked practically, Min Raj has been able to share the gospel with the villagers and we have seen spiritual water as well as drinking water flow into people's' lives and homes.

An exciting a fruitful partnership has been forged with two Rotary Clubs; one in the UK and one in Kathmandu. Poynton and District Rotary Club and Patan South Rotary Club joined forces to set up a project to put a new water supply in a remote village outside the Kathmandu Valley. 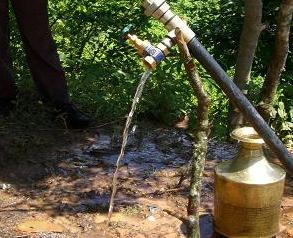 Wojestar village was by a river that was so polluted with bacteria, pesticides and fertilisers it was 90% pollution. It was poison.

Patan Rotary Club sent out engineers and surveyors to plan a way to bring water from a spring 4km away into the village. Poynton Rotary Club raised £5,000 through a charity concert and secured another £5,000 matching grant from Rotary International.

Go was able to set the project up, with Carolyn making two trips out to Nepal to gain information and photographs and present this back at home. The project was two years in the making but on Christmas eve 2009 I was in Wojestar to see the first water come flowing through the pipes and the new taps in the village. Much joy and celebration.